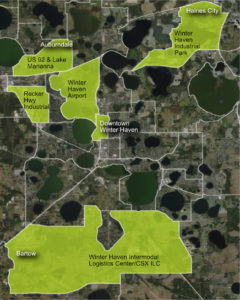 The federal Tax Cut and Jobs Act of 2017 created the opportunity for state Governors to designate up to 25% of the Low-Income Census Tracts in each state as “Opportunity Zones”.   On Thursday, April 19, 2018 Governor Scott released his list of Florida Opportunity Zones including six located in or adjacent to Winter Haven.  These census tracts are identified below.

​The Opportunity Zone designation lasts 10 years and enables businesses and developers to defer capital gains taxes on funds invested in Opportunity Zones. The ​IRS will need to undertake a rule-making process to develop specific guidance to investors.

Opportunity Zones also provide benefits over a longer term including a step-up in invested basis and even a permanent exclusion from taxable income of capital gains under certain conditions.